Welcome to Protec Football Academy, We are back in training after lockdown with the season continuing untill late June 2021. We will be trialing players in age groups 9-15 to join our already succesfull elite teams and development program.

Protec are a Standard Charter F.A Recognised Club and one of the UK’s leading providers of soccer and Elite team training ranging from u7- u15. Protec offers the chance of its players being seen by some of the leading professional clubs recruiting for Academy football. Our qualified and experienced staff include both current and ex-professionals, who provide the highest level coaching available that is helping Develop home grown Talent for the future.

We are currently working with a london Premier league football club and holding regular trial games to play against the Academy sides. (next trial date for this and protec teams are beggining in March 2021 applications are being taken now) go to our coures page for all information on how you can join us.

"Protec’s record as a leading independent Football Academy speaks for itself. They offer a fantastic opportunity for young players to develop their football talent."

We offer a wide range of specific training sessions that include, team, holiday camps and private coaching to accommodate different levels of ability, all of which have been specifically designed to ensure the continual development for those with the ability and desire to progress.

" Before the Wenger "this man changed football fitness" myth, there was Pete Edwards. Introduced modern football fitness, nutrition into English game with NFFC '93. A bigger architect of promotion to 3rd in Prem than Clark, Pearce or me.

Pros, use him, he's the Godfather."

We have Direct links to a number of Professional Football Academies and operate a number of Progression, Intermediate and Advanced training courses based throughout London and Hertfordshire, that are within easy reach for those that are willing to travel. A number of boys have been signed  by clubs such as Arsenal, Chelsea, and West Ham. Scouts from the Premiership and League Clubs often attend our sessions and games to look for new talent.

With over 25 years in the business, there isn’t a top UK Football Club that has not heard of us!

Protec Player Malachi Mbogba who has been part of the Protec Pre academy and Advanced for the last... read more

Constantine who has been with Protec for three years has been signed by Barnet youth... read more

Protec player Alex signs for Barnet! As seen on ITV's "This time next year" - Check out his story... read more

Protec Under 11 Edward Leach has signed for A.F.C Wimbledon! After competing a six week trial with... read more

Having been with us 3 years U8 Xavier Parker has signed for West Ham FC! Xavier has been on the... read more

After being with Protec for 2 years, Aaron Walker has been signed by Barnet FC! Well done Aaron!... read more

Under 8 protec player Salivo Sidebe pictured in a recent cup win for west ham is signing for West... read more

Under 10 Teo Minchev has signed for Premier League side Chelsea FC! Teo who has been with Protec... read more

U11 Archie Chaplin has signs for Chelsea. Archie began training with us 4 months ago at our Potters... read more

Basilio Reino has signed for Chelsea u11 Academy squad after a successful trial period with the... read more

Under 10 Josh Nichols has signed for Arsenal Academy u10 squad after a successful trial with the... read more

Under eleven Caleb Dennis has signed for West Ham after completing a six week trial at the... read more 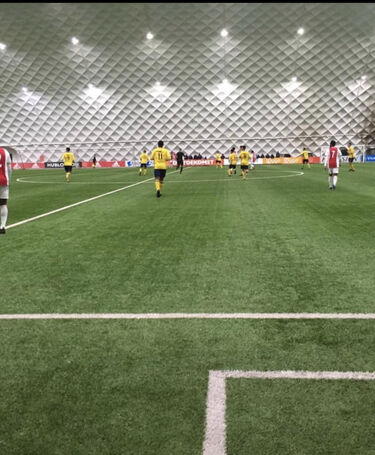 Protec in association with  a Leading LondonProfessional Premiership club will be holding trials for age groups U11 and U14 starting in january. Other age groups will follow later in the year. For further information and how to apply go to ou... 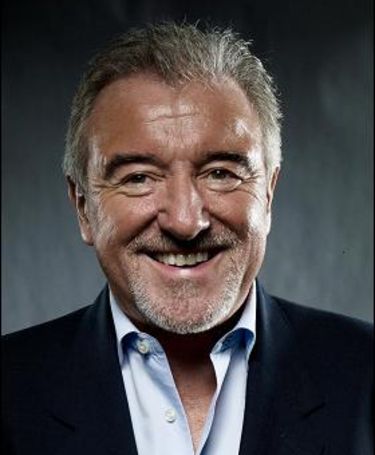 Terry Venables (ex England, Barcelona and Spurs manager) visited our Potters Bar centre and was quoted as saying that “Protec’s record as a leading independent Football Academy speaks for itself. They offer a fantastic opportunity for ... 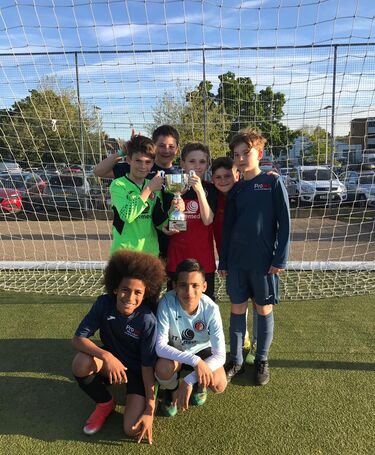 Protec Team trials are taking place throughout December and January there are still a few places available so if you are aged 6-u15 have talent and are looking for a new challenge then we want to see you! Weekly trials for all of the above age gro... 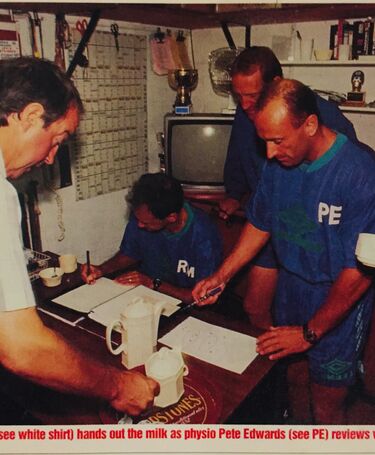 In an article published and more recently tweeted by stan collymore our head coach  Pete Edwards was mentioned by the ex Nottingham Forest, Liverpool and England player. The T.V and radio presenter Stan Collymore said Pete Edwards was first c... 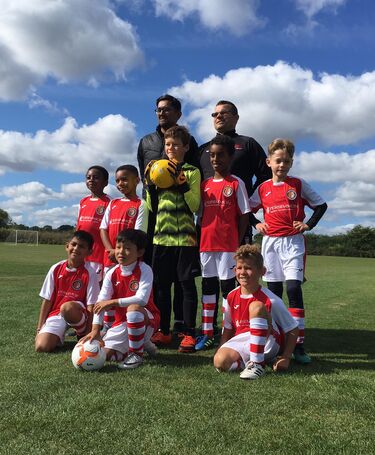 Protec,s u10 Squad are ready for the new season with some great team performances in training games after coming back from lockdown.  The squad has alreadyattracted attention from professional scouts who are regularly in attendace at our trai... 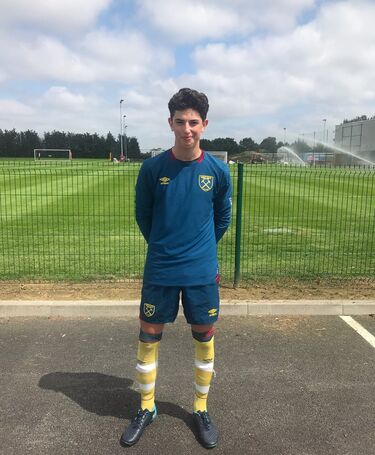 U14 Protec Player Marty Gage has signed for West Ham after a successful Trial period with the club, Marty spent three years at Protec had trials and played for clubs Ipswich and Norwich during his time with us. The hard work has finally paid off a... 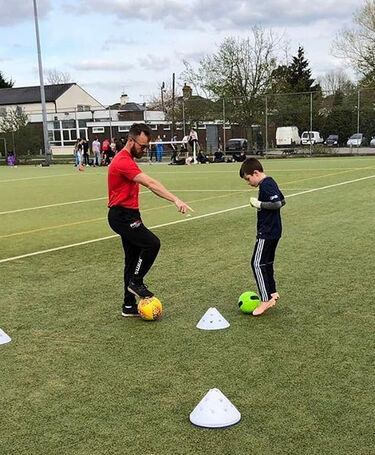 One To One Private sessions available

Private sessions with a Protec Coach are now available you can book a thirty minute slot with one of our U.E.F.A trained coaches. This is for all age groups 7-15 Sessions will be tailored to your individual needs with the appropriate coach. If you... 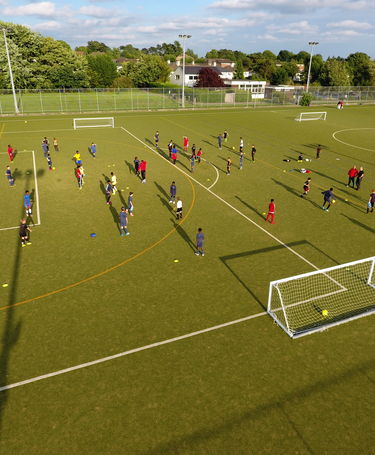 Protec Advanced training sessions have been a massive success for the academy and its players having seen a number join our league teams and some obtain trials at professional clubs. We are currently recruiting players age 7-U15 to join one of ou... 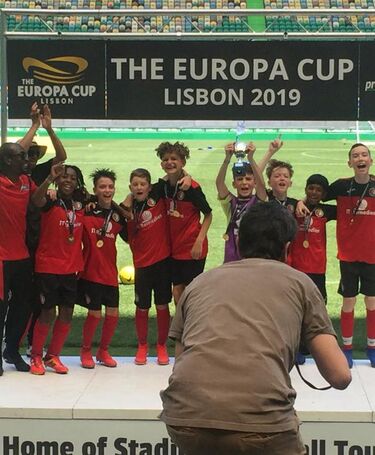 A fantastic win for the Protec U12 squad who battled against some of the hardest teams to win the Shield cup in Portugal. The boys spent the last two months in preparation and the hard work payed off bringing home the shield cup. Well done to a... 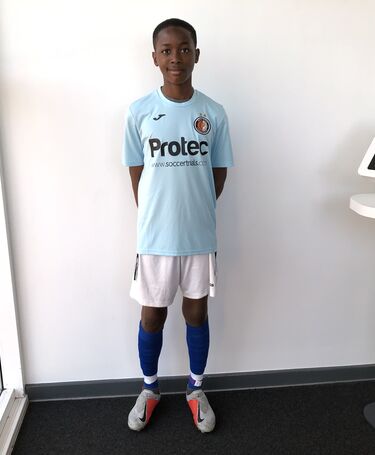 Benjamin goes on trial at Chelsea

U13 Protec player Benjamin Quansah has been offered a six week trial with Premiership club Chelsea after impressing Scouts at Pre Academy training sessions on Monday and Friday evenings at our Hertfordshire and southgate centres. Benjamin has been... 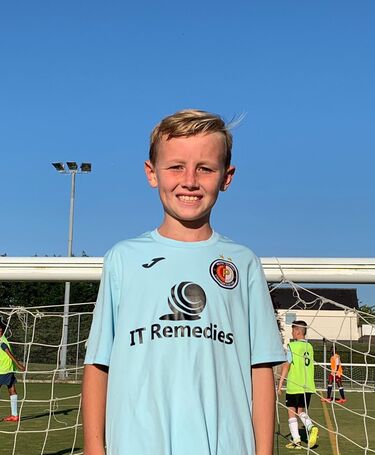 Liam goes on Trial at Chelsea

Protec u11 player Liam Lambert has secured a trial with Chelsea Academy after being seen in protec,s Pre Academy sessions. Liam from the U.S.A has trained every summer and has attended every session at Protec whilst in the U.K. His game has gone f...

Protec play at spurs at all age groups

Protec Football Academy have played spurs Academy at all age groups with the games resulting in two players being invited back for trial with the premiership academy,  The scout who is well respected Commented and, the organisation and standa...

Protec Offer a unique training philosopy and oppertunity for age groups 8-15, our coaches aim is to foster entusiasm and commitment from all of its players with our weekly sessions through demonstrating these tecniques themselves. The training s...

We are looking for players to join us at age groups 9-15 if you are an exceptional player looking for an oppertunity to play at a high ,level apply today. 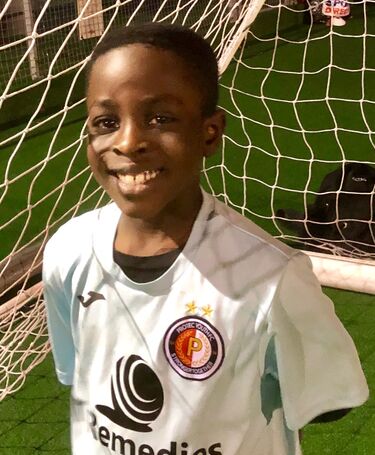 Protecs under Eight player Josiah has been signed by West Ham after a three month trial period with the Premiership clubs Academy. Josiah has played in West Hams top under eight side after being recommended for trial by Protec,s Head Coach Pete Ed... 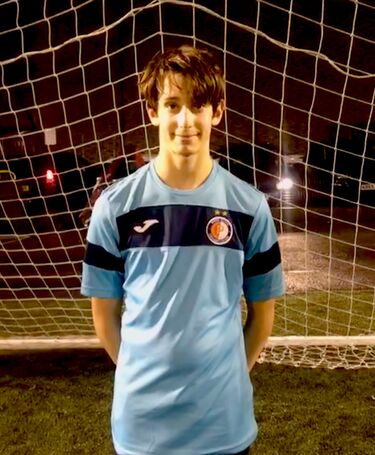 Under 13 protec player Joel Sala is starting his trial with Chelsea after  his recent performances for Protec in the Junior Premier league. Joel has been training with Protec for the last year and has gone from strenth to strenth over the las... 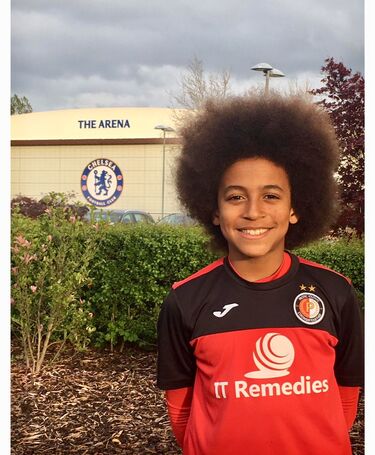 Well Done to Kai Torres!! Determination, Commitment , Dedication are the words that come to mind when we describe Kai Torres. Coaches, Teammates, Parents with Us at Protec have all witnessed his Progress as well as his genuine Love of the game... 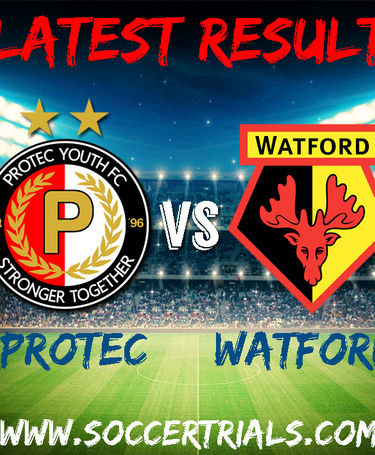 PROTEC WIN AGAINST WATFORD! A mix of our best Protec U11 and U12 squad were selected by head coaches Pete and Dan to play against Watford's Academy on Tuesday evening. The team came out as eventual 3-1 winners against a very strong Watford side th...

Protec will be playing in the upcoming West Ham United tournament to be held at the first team training ground in Chadwell Heath. We will be selecting the best players from U8 & 9 to take part. This is a great opportunity for all to show the t...

Spurs academy Scout atended our potters bar training centre and has picked players to monitor in varoius age groups, this is part of an arrangement that our head coach has set up with a number of clubs this season to give Protec players a unique o... 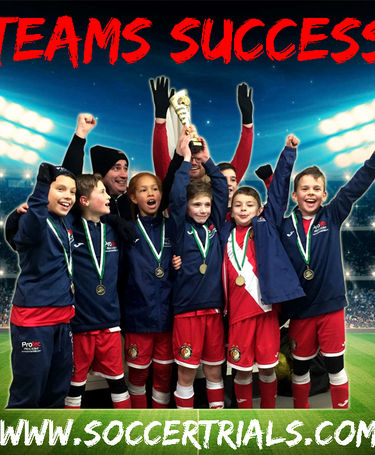 Protec U10 Cobras again amazed onlookers at the Reading Majaski Stadium with a fine footballing display that saw them competing against 28 regional teams to come out on top as winners! The beat Aldershot 2-1 in a very close fought final with goals... 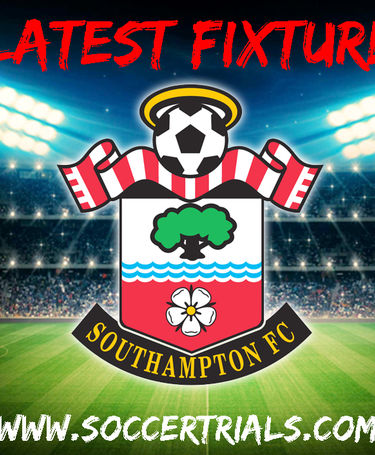 We had two great games against Southampton's Academy in two age groups last week. It was very tough for both teams and a great learning curve for all. The U10's selected performed brilliantly, playing up a year against one of the best sides at ca... 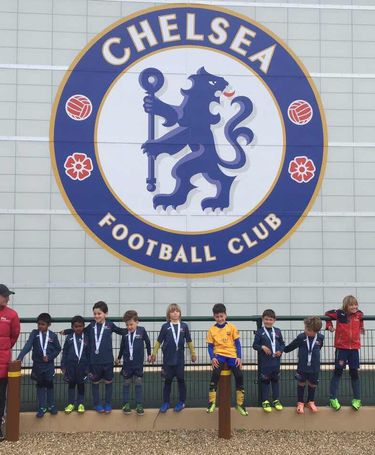 Chelsea tournament Protec's U6 squad won 4 out of 7 games against Chelsea in a recent tournament held at the Chelsea training ground. Some great performances have resulted in three of the players now being monitored officially by the Premier Leag... 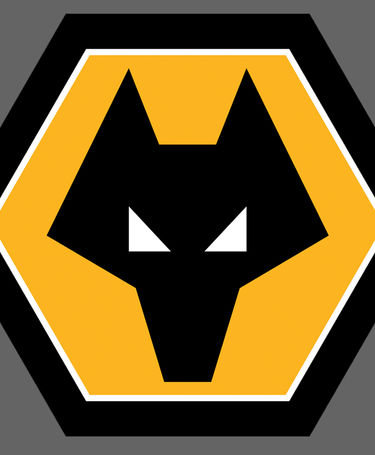 Protec with a mixed squad of U12 and U13 players played Wolves London Development and came out winners in a hard fought battle with a scoreline that finished 10-7 in Protec's favour. This behind closed doors game has seen one Protec player taken o... 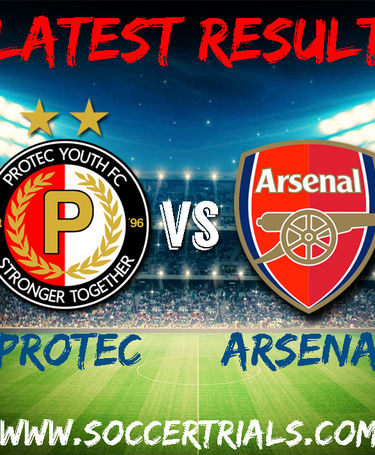 Protec U7 and U8 groups played at Arsenal Academy and were worthy winners in 2 out of 3 games at both age groups with players from both groups catching the eye of Arsenal coaches and scouts! Each group played three games, with the Protec teams win... 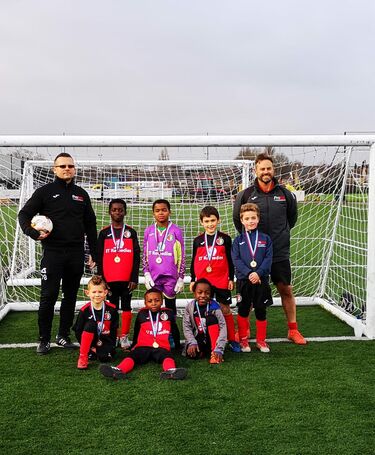 Protec U8/9 played in the West Ham tournament winning 4 out of 5 games to top the group against some very strong opposition. The tournament consisted of a number of top teams invited in that qualified to play after unbeaten league runs. Well done ... 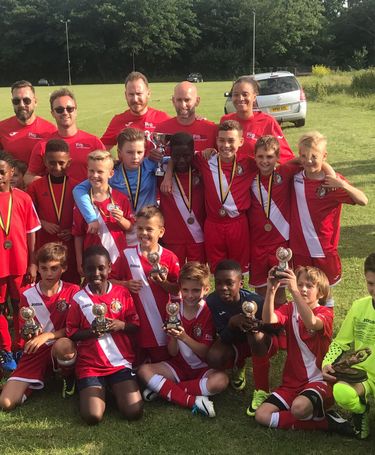 PROTEC REACH FINAL WITH BOTH TEAMS Protec U10s have reached the Hertfordshire final and both teams played off in a nail biting game that led to the Protec Mambas coming out eventual winners against our own u10 Vipers team. Both teams played throug...

Protec player Alex Dimitrov featured on on ITV's "This Time Next Year" and was a success! He appeared on the programme and came through the doors a year later a signed player. Alex's journey began at Protec training and playing in our Pre Academy ... 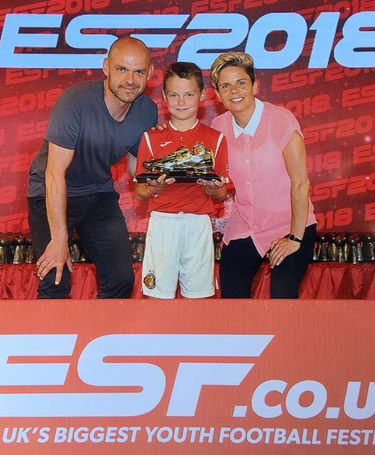 Protec U9 Logan Strafford has won the E.S.F Golden Boot.  Logan was the highest goalscorer in the competition and had the best voted goal in the tournament. Well done Logan - keep up the good work! Are you the best player in your team? If so,... 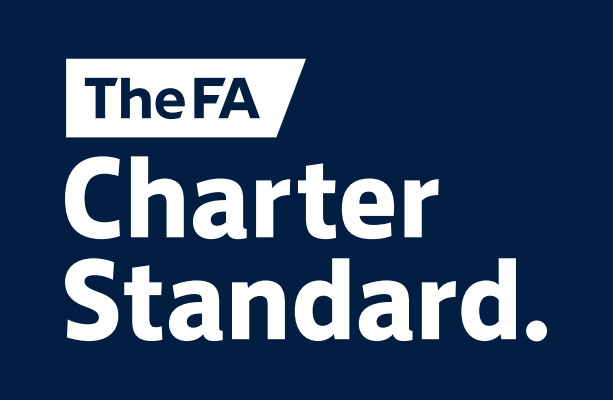 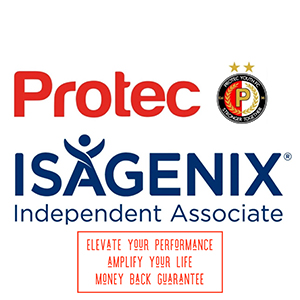 Protec in conjunction with a top premiership club will be holding trials starting in January for age groups U11 and U14 to find out more go to our Talent identification page. Read More

Quick Alerts There are currently no alerts.

RT @SoccerAM: This World Cup Missing XI would have a shot at winning the tournament! Which players would you add/remove? ???? Commeâ€¦ https://t.co/1JPFzTEimi 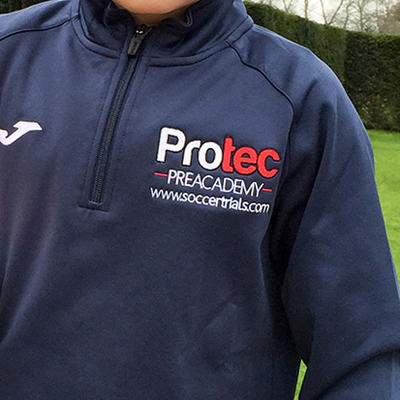 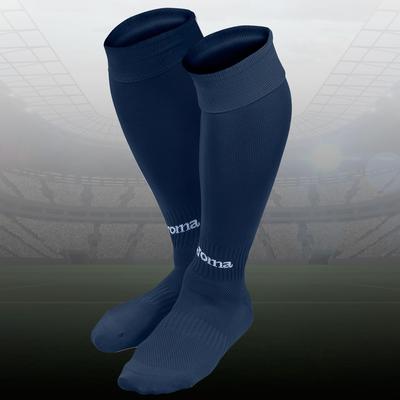 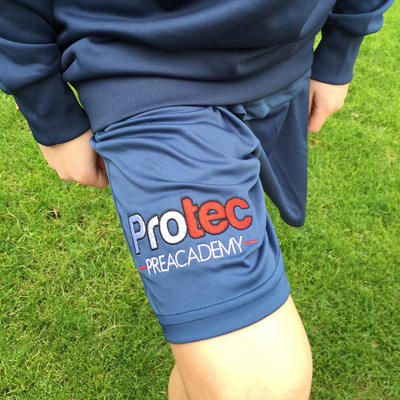 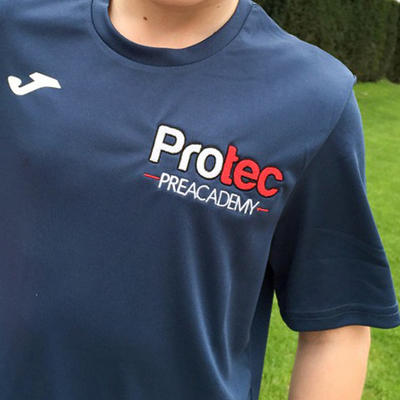 Why not see how many keepy-ups you can do! Compete with your friends and see who can get the highest score, click on the ball to start!

Please fill out the form below to complete your application.

Hi , thank you for getting in touch! Your message has been sent successfully and we will get back to your application as soon as possible.

In the meantime, why not explore a bit more of the Protec website.